How Much Does a Redbox Franchise Startup Cost

How to Buy a Redbox Machine

How Do I Start a Redbox Franchise?

Where Can You Find Redbox Franchise Opportunities

Coinstar (CSTR) runs two primary businesses: The coin machines you see in grocery stores that give you cash for your change, and Redbox, the DVD rental kiosk business. The Redbox DVD kiosk business provided roughly 84% of the company’s revenues in the last 12 months, ended 9/30/11. From the latest 10-K, Coinstar described the Redbox business as such:

We operate approximately 35,400 self-service DVD kiosks, in over 26,100 locations, where consumers can rent or purchase movies. Our DVD kiosks are available in every state, as well as Puerto Rico and offer our consumers a convenient home entertainment solution. Our DVD kiosks are installed primarily at leading grocery stores, mass retailers, drug stores, restaurants and convenience stores including Walmart, Walgreens, and McDonalds. Our DVD kiosks supply the functionality of a traditional video rental store, yet typically occupy an area of less than ten square feet. Consumers use a touch screen to select their titles, swipe a valid credit or debit card, and receive their movie(s). The process is designed to be fast, efficient and fully automated with no membership fees. [Figures updated as per latest quarterly results (2/6/12)]

The business sounds simple enough, and should be relatively easy to model. But, Wall Street plays their same old song and dance, and just applies trendline growth rates and margins to the current business to forecast what may happen in future years. That is the wrong way to go about estimating the future earnings of this company. A much more intuitive way is to look at the individual economics of a single (average) kiosk. This provides telling information about the health of the business and the underlying economic trends of the kiosks. Looked at through this lens, Coinstar’s Redbox business is currently hiding phenomenal and improving profitability. Since Coinstar breaks out the segment profitability of the Redbox business, we can do a deep-dive analysis of the individual kiosks.

Shown below is a chart with the number of kiosks Redbox averaged in the quarter, along with the revenue per kiosk per month that they generated from the average kiosk. 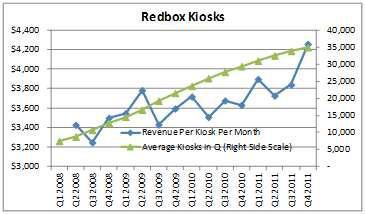 As one can see, the revenue per kiosk has been steadily increasing. Multiple drivers push this number up: 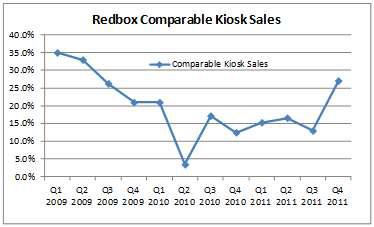 Try finding a classic retailer putting up numbers even close to these “comps.”

Our “average” revenue per kiosk per month numbers from the first chart show less growth because brand new kiosks, which are relatively under-used by consumers, drag the average down. As these kiosks are “discovered” and draw more repeat customers, they contribute more and more to the top and bottom lines. As new kiosks become a smaller portion of the total kiosks installed, the average revenue line should increase further.

First, Q4 [2010] marked Redbox’s first holiday season with delayed titles. Based on our experience during the third quarter, we believe we had a solid indication of consumer rental patterns and expected stronger performance from the new 28-day delayed content during the fourth quarter. We purchased to this higher level of expected demand, and unfortunately many of these titles did not perform as we had anticipated. We are comfortable with the delayed deals we signed last year, and believe we can optimize inventory for these titles as we go forward.

[For Q4 2011, announced 2/6/12] As we said on our October call, there was a higher than average number of titles from lower margin studios in Q4 that would compress margins. Second, while video games continue to be an important consumer offering, we over purchased inventory for Q4 and also saw a decline in salvage value. Both factors negatively impacted product margin by a combined 2.1 percentage points. (Link)

In summary, Redbox was working with “new” products and tried to provide the best consumer experience possible. They wanted to ensure sufficient inventory on the “new” product (28-delay content in Q4 2010 and games in Q4 2011) and they subsequently over-bought. As seen below, at the end of Q4 2010, Redbox had $4,500 worth of movies in every kiosk, up from their typical $3,500. That greatly inflated their DVD costs in the next quarter. This makes sense, as the DVD Library Inventory is amortized (or used up) creating COGS in the subsequent one quarter, and sometimes two. 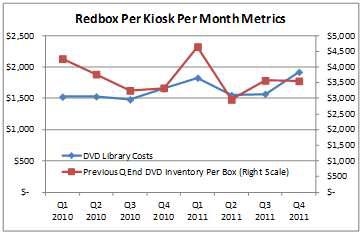 As these “new” products mature, I believe Redbox’s DVD and game cost per kiosk per month should be rather steady. They have to contend with no agreement with Warner Brothers Studios that could inflate costs somewhat. However, I think they will be able to keep the full-year kiosk monthly content costs closer to $1,750 without any problem.

What about other costs per kiosk? Other direct costs include rent paid to the host of the machine [Wal-Mart (WMT), Walgreen (WAG), etc.], field employees to rebalance inventory amongst machines in a given locale, bandwidth to connect the kiosks to headquarters, and other miscellaneous expenses. There are also general overhead expenses and depreciation of the physical kiosk. As can be seen below, these expenses are incredibly stable on a per-kiosk basis. Intuitively, this makes sense. As grows its base of kiosks, it gains leverage on local managerial and labor costs, and it can strike better placement deals with large retailers. Moreover, its physical, fully automated kiosks, never demand a pay raise. 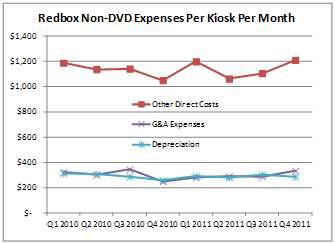 *G&A and other direct costs estimated using wholeco figures for Q4 2011 as the 10-Q with segment breakdown was not available at the time of writing. 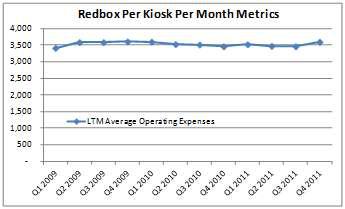 On the other hand, Redbox’s revenues are steadily increasing on a per kiosk basis. Higher revenues and fixed costs mathematically leads to higher profitability per kiosk, as seen below (EBIT per average kiosk per month): 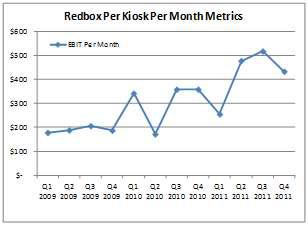 So, we have seen Redbox profitability increase greatly on a per kiosk basis over the last few years. But, what about recent events? Redbox recently instituted a 20% price increase on its standard definition DVDs (from $1.00 per night to $1.20 per night). Blu-Ray (7% of kiosk content) stayed at $1.50 per night, and games (4.6% of kiosk revenue) stayed at $2.00 per night. So, roughly 85% of their kiosk revenues increased in price by 20% on October 31st. What does this mean for Redbox’s revenue per kiosk in 2012? It means it should go up significantly! But, by how much?

As of Q4 2011, the trailing 12-month average revenue per box per month was $4,025. Again, there was a 20% price increase on its SD DVD content, which is 85% or greater of their total Redbox revenue base. Note, before the price increase, Redbox was already seeing average revenue per kiosk increase by 4-5% annually. So, we need to add (85% * 20% = 17%) to the 4-5% current trend rate to get to a peak percentage increase to average revenue per kiosk. We will call the peak increase roughly 21%. However, there is likely some amount of demand elasticity. Ie., fewer people rent Redbox DVDs because of the price increase, or they rent fewer movies each time they go to the kiosk. Let’s say this elasticity costs them 10% growth on the average kiosk. Also, two months of the 12 in 2011 included the price increase. So, let’s assume that we see roughly 9% growth (10/12 months * 11%) on the average kiosk as likely for next year. (I think this is conservative.) That leads us to revenue per kiosk per month of roughly $4,390, versus the trailing 12-month revenue of $4,025 as of Q4 2011. [I understand this is crude math but it is generally correct, in my estimation]

Therefore, total revenue for Coinstar, will likely look as follows (excludes any effect from new ventures, the JV announced with Verizon today, and the purchase of NCR’s DVD business, also announced today):

This closely resembles Wall St. estimates of $2,170mm in revenues for 2012. As per the price increase, and the elasticity of demand, people are mistaken if they think the elasticity will be as great as that witnessed with Netflix. First, $1.20 vs. $1.00 is psychologically not that powerful. To the human mind, it’s only $.20. On the other hand, for someone on Netflix’s one DVD mail program who got free streaming, the new program saw costs go up roughly $8.00. That is a much harder pill to swallow and caused much more backlash than Redbox will ever likely see. I believe the Q4 2011 results of Redbox announced tonight (2/6/12) proved this point in spades.

It is my belief that Wall St. has greatly underestimated the earnings power of the kiosk model. Remember total operating expenses per kiosk per month have consistently been around $3,500, and recently decreasing below this level. But, astute readers will know there is a small catch! The recently enacted Durbin amendment means that Redbox will be paying more each time a debit card is swiped to rent a movie. On their Q3 2011 conference call, Coinstar management stated:

On interchange fees, the way we’re looking at it and estimate for the quarter, they’re going to be between $10 million and $14 million for the quarter is what we’re looking at and that’s what’s in the guidance as we took a look through there. We are working to mitigate those. Some of those are things that we can do that cause – that we can do through making some technology changes. And some of those are through continuing to work with the card issuers to work on the rates and be able to mitigate those costs. So we’re working through that and have confidence that we’ll be able to do that over the next several months. And so again, what we have in there is between $10 million and $14 million for the quarter in costs. (Link)

Taking management’s number of $14mm in incremental interchange fee expense for the quarter, divided by the likely average number of kiosks of 35,000 for Q4 2011, and 3 months, one gets $135 in incremental expense per kiosk per month. So, if we took our $3,500 number for the per kiosk per month operating expense metric and increase it by $135, we have a new operating expense run rate of $3,635. Let’s be conservative, however, and assume that Warner Brothers Studio costs and other movie costs will increase (they did in Q4 2011). Let’s just assume that costs per box will jump from $3,500 to $3,800. Running this through our Coinstar model, gets us the following results. (I have assumed Coin Change Machines and new ventures provide $40mm in EBIT (which is less than any recent history), interest expense is $25mm for the year, and diluted shares outstanding stay at the Q4 2011 level of 31.6mm) 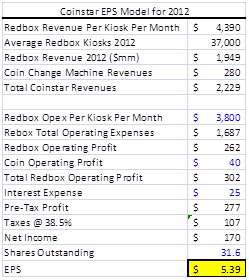 It is quite apparent how it is more than possible for Coinstar to achieve $5.00 in EPS for 2012. Moreover, Coinstar has said they will make diligent efforts to reduce the incremental $14mm in interchange “swipe” fees assessed by the credit card companies. So, $3,800 could be INCREDIBLY conservative in a best case scenario! Using this simplified model, we can understand a range of EPS results based on the Operating Expenditures per month per kiosk: 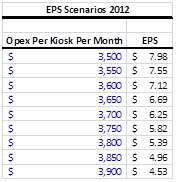 Looking at the graph below one more time, I can come to a quick conclusion on where EPS will likely be for Coinstar in 2012.

What Wall St. is missing is the massive operational leverage inherent in the Coinstar business model. Every $100 per month in operating profit per kiosk is roughly $.86 of EPS. Redbox’s recent price increase will likely fall to the bottom line much more than people estimate. In addition, they have exciting new growth opportunities with their new ventures (they regularly shut down new venture trials so it is obvious that these tests have been exceeding high hurdle rates for return on capital). Next, their recent JV announcement with Verizon will likely give Redbox higher volumes as Verizon rolls out its digital strategy – Redbox said it would be contributing movie nights from its kiosks to the product offering from the JV. In summary, given that Coinstar is flexing its pricing power, still growing, has international opportunities ahead, and far from saturation, I would give it a market-like multiple of 15 on its $5.40 in likely 2012 EPS. That’s an $80 target for Coinstar.